Better late than never (because of the video editing software) is our slideshow video of this year’s Paredes de Coura Fan Weekend, which took place in Portugal back in June.

Similarly to the Bricktastic video, I decided to do a photo slideshow instead of the usual walkthrough style. Video footage from this year’s Brickish Weekend took a long time to process, and the quality wasn’t as good as I’d hoped. Photo slideshows make showcasing the event a lot easier, but which do you personally prefer? Let me know.

The popular people have already gone into detail about the event and everything that took place. All I can add is that I returned to the UK feeling very humbled, literally in tears, and somewhat unhappy that I had to leave Portugal. The hospitality from the Portuguese fans was faultless, and the event itself was like nothing I’d ever experienced. 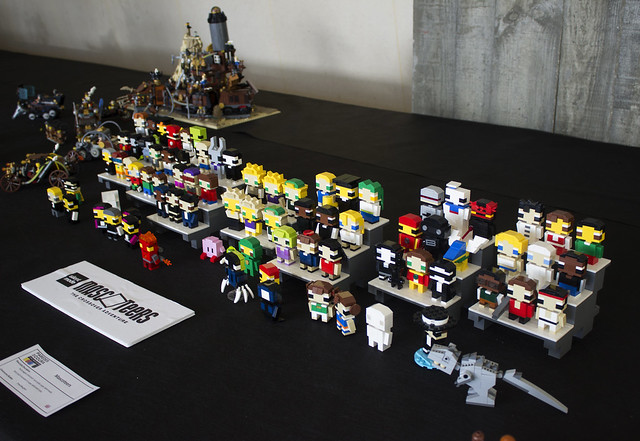 I was even spared the usual ignoring/upstaging of my display. I’d spent most of my time either in the break room or walking around, yet there was no concern over things getting stolen, misplaced or damaged.

The Mascoteers family had been extended to around 70 figures at the time. As well as not having the right parts for some newer ones, it was discovered that Yve’s body has gone AWOL.

Unlike any of the other events I’ve been to, there was an active poll among for the “best in show”, for which there was a prize. Naturally the winning display – the Enchanted Forest – also happened to be the biggest, and won by a healthy margin.

My choice for Best in Show

Without taking anything away from the other displays, my vote for “best in show” would have gone to this display, the Heartlake Residence. It makes use of an enviable amount of 2×4 tiles in Tan, and it’s the kind of thing I’d build if I had the parts and the space. It’s great to see people  taking minidolls seriously.

You can see most, if not all, of the models on display at the Fan Weekend by watching the above video. Please do: it was recorded in glorious full HD, and took an age to upload!