Hello folks. It’s been a while since I’ve posted on my own site!

Since we’re coming to the end of the year, I thought it was good timing to make another post about my future intentions.

In terms of personal life: 2019 has been a very good year.

Although work takes up the lion’s share of my time, it has afforded me the ability to do more.

I was able to upgrade my flight to Billund for the LEGO House Christmas party. It’s something I’ve always aspired to do, and it really made a world of difference. It was a luxury, however, and definitely not something I want to do all the time.

I was also able to visit both the new Birmingham and Southampton LEGO retail stores, thus re-completing my tour of all the stores in the UK.

I’ve also accomplished another long-time goal of visiting LEGOLAND Deutschland, along with two LEGO retail stores in Munich, and then another in Slovenia.

Having kept a low profile in the wake of the Mascoteers controversy, I’ve wondered several times whether it was worth staying with the hobby. All the while, I’ve still been buying LEGO – but not building!

I’ve been paranoid, going as far as suggesting there are people trying to shut me out and pretending my work and I don’t exist. It might be a reach, but given what I’ve seen people do and say this year, I don’t think the paranoia is entirely unfounded.

But there was a ray of hope, as – somehow, some way – the official SilentMode.tv YouTube channel reached over 1,500 subscribers.

You might remember a post I made at the start of this year, about things I wanted to accomplish in 2019. So how did I do?

❓ Revisiting at least one [other] classic MOC.

I actually did: I had redesigned the Winter Village Clothes Store, which was pictured in the aforementioned post.

While I had actually completed the build, it wasn’t designed well at all. I made the mistake of focusing too much on modularity, and not enough on stability or aesthetics.

Work is ongoing for a custom weblog solution, under the code name RilleTalk (named after the newest member of the SilentMode Family).

As well as wanting greater control over displaying content on the site, I got fed up of the constant WordPress updates and unwanted themes – as well as the numerous hacking attempts by those researchers.

❓ The official end of   Mascoteers.

Anyone who thought it was funny to call my Mascoteers project “BrickHeadz”, especially to my face, can go f*** themselves and never speak to me again. (Those who called it Minecraft can just go f*** themselves.)

Mascoteers was by far my most expensive project to date, and I take giving someone else credit for my work as rude and disrespectful. I don’t and won’t do that to anyone.

For the grand finale I reverted to the name Mascoteers, of which I think the overall theme worked better than IhNohMinecraft.

One good thing about IhNohMinecraft was that it gave birth to a custom typeface, which you can now buy on MyFonts.

I haven’t yet updated the official mini site with the new figures, but I originally set out to have a total of 200 figures in the entire line-up. It ended with over 400.

While they were especially built for displaying at Planet Kock in Slovenia, I didn’t have enough space (or display stands) to show them all. I’m hoping I’ll be able to set something up in the near future, to where all 400+ figures will be on display at once.

I realised I really enjoyed designing and building the Mascoteers, and even now I have more ideas for new figures. But beng four years old now, the project has run its course; it’s time to move on to [hopefully more respected] other things.

❌ Donating an item to Creations for Charity.

I’d spent so little time building this year, that I completely forgot about this one. But would I have done it anyhow?

❌ One more shot at LEGO Ideas.

As well as not having designed or built much in 2019, I had very little confidence in designing something I could submit to LEGO Ideas.

In addition, my paranoia (see above) really set in when I gave it a shot. My previous three attempts at LEGO Ideas resulted in less than 200 supporters combined. Anything dependent on a popular vote – in my mind, at least – means I’m screwed.

What actually happened in 2019. 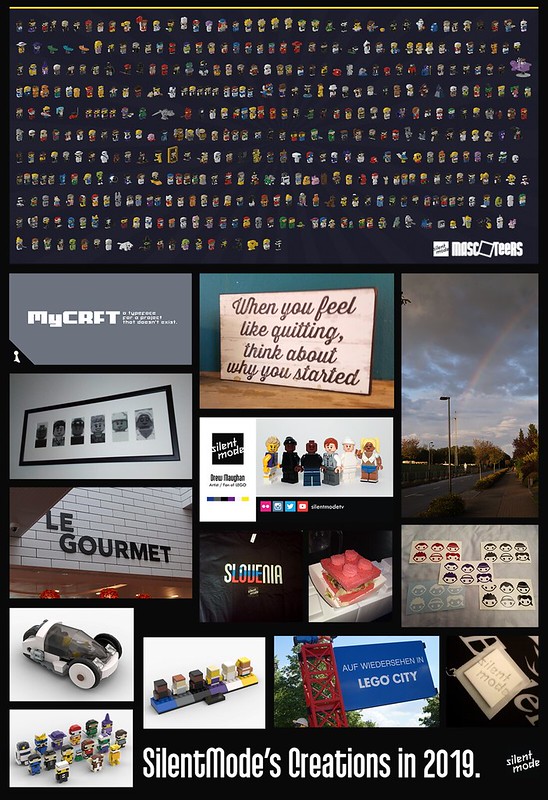 Although I hadn’t posted much this year, I was surprised at just how much I was able to accomplish. I have much more to show for this year than in 2018.

Have a Happy New Year!

This concludes my post about 2019. I will be back later this week to talk about my aims for 2020, which I’m determined will be the “Year of the Mode”. 🙂